On the road at last, sort of.
﻿﻿
﻿﻿I'm taking a side trip to Montreal, my old home town to visit some friends, but most importantly my father who is not well. So I've left the Argosy in Saint John and headed for the USA.

It's a much nicer drive to Montreal through northern Maine than the ridiculous northern route through Canada. This also gives me another chance to have a beer with Dr. Neil Fisher, whose works at the University of Maine.
A beautiful, bright sunny day, and a speedy run to the border at Calais Maine. Yes, speedy, without the coach, it's tempting to run a bit quick, will have to curb that.
Once in Maine it was an easy run down the Airline, Route 9, which used to be a pretty ratty road, but it's lovely now. 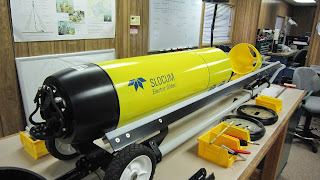 Dropped into Dr. Fisher's lab mid afternoon and got a tour.
I just love this place, Neil has the coolest job!
Besides the ocean radar research, he deploys buoys throughout the Gulf of Maine that record all matter of science stuff, but coolest of all, submarines! 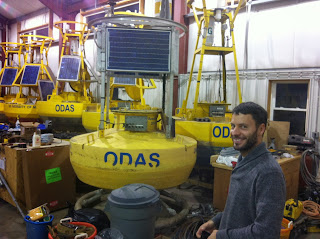 YES, I said submarines, Neil has these little yellow subs, which have no propulsion, rather they glide by compressing
a balloon of air in the nosecone, thus reducing it's buoyancy so it sinks, or glides because it has wings. collecting data all the while, as it reaches it's predetermined depth, it lets the balloon expand again, increasing it's buoyancy and rises to the surface, again on a glide path. Then it surfaces, zaps all the data it's collected by cell phone to the central server, get a GPS fix on it's location, instructions from the server and submerges for another cycle, so very, very cool!

After the tour, well, off to the pub!
Great spot, Woodman's in Orono Maine. We were met there by Jim, great guy and fellow 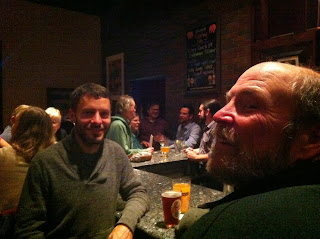 Rover enthusiast.
I had an amazing steak and a sampling of local beers.

The night ended a bit late,...