A day at the beach 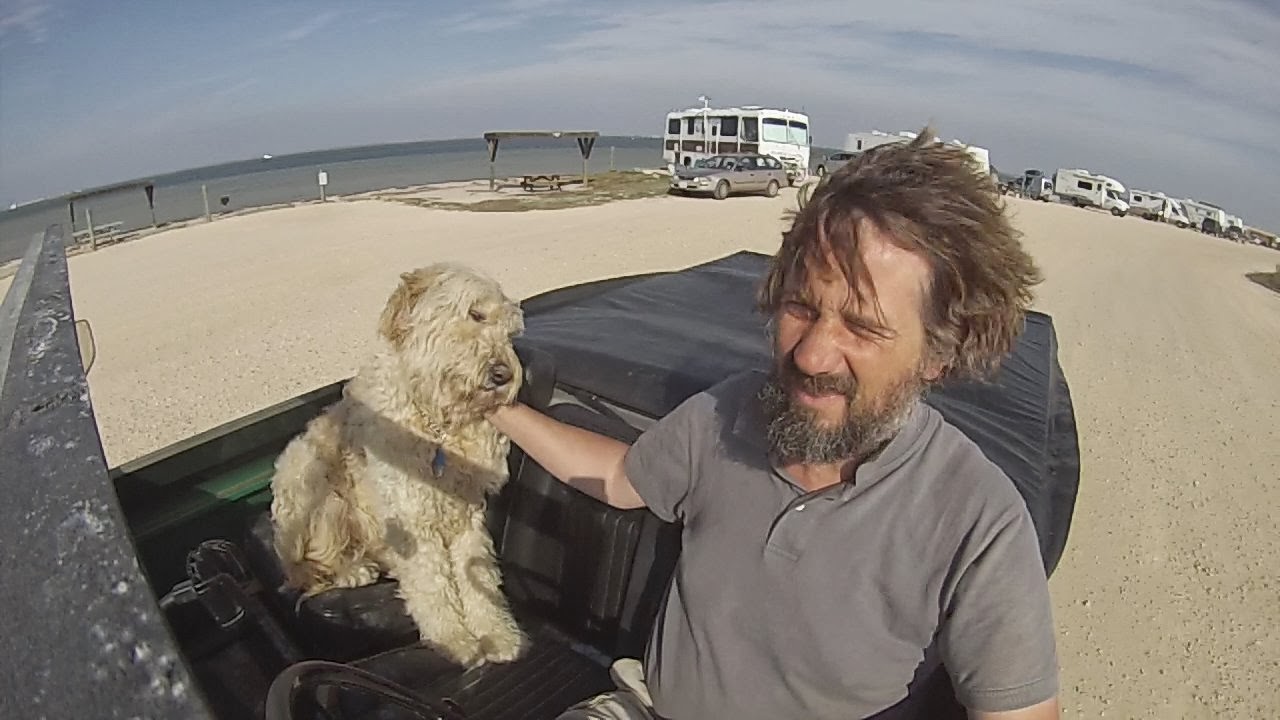 A gorgeous, gorgeous day, too nice to work so it's off to the beach!
Took the top off the Rover and set off. I just love driving this truck with the roof off.
And so does Geordie.
Although we're staying on the beach, were on the inland, or lagoon side of the island, for the big surf we cross over to the gulf side. It's an awesome beach, not too many people, a huge pier with a pretty good pub on it. 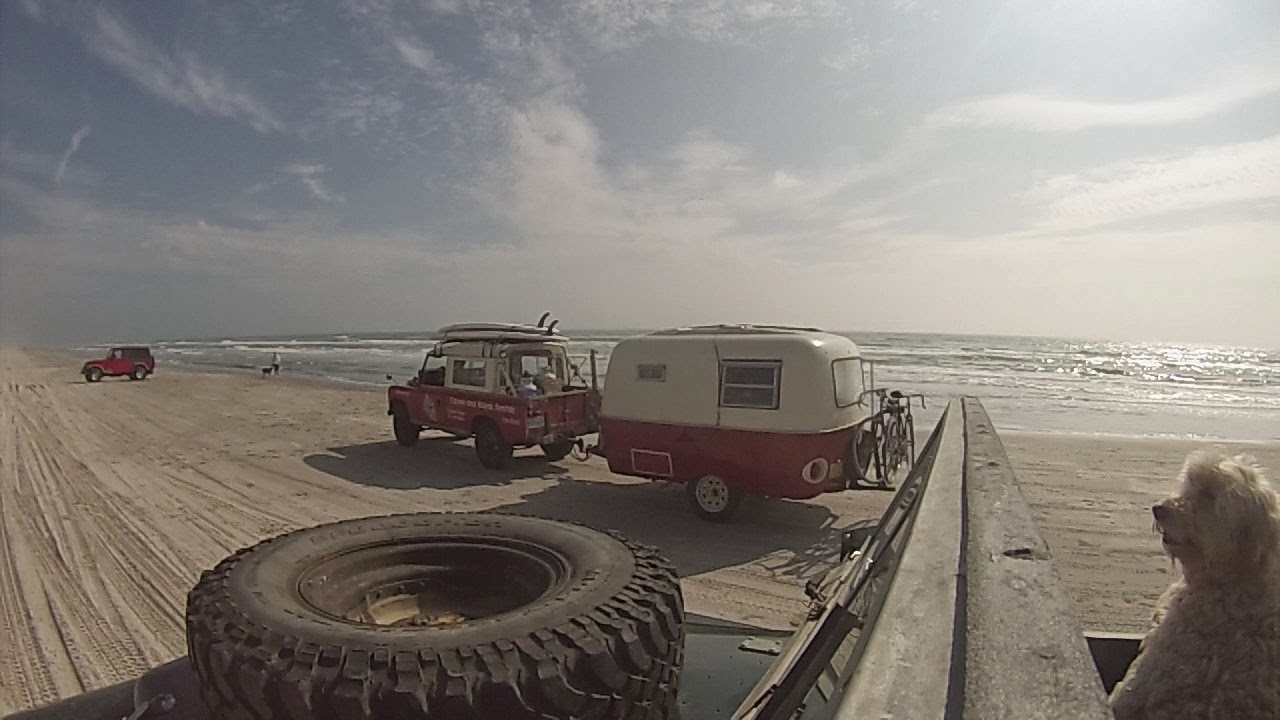 Coming from Nova Scotia, I can't quite get used to driving on the beach, but here it's the norm. In fact many two wheel drive cars venture out into the sand, many get stuck, I pulled one out but didn't get any pictures, nice folks, we had a good chat. 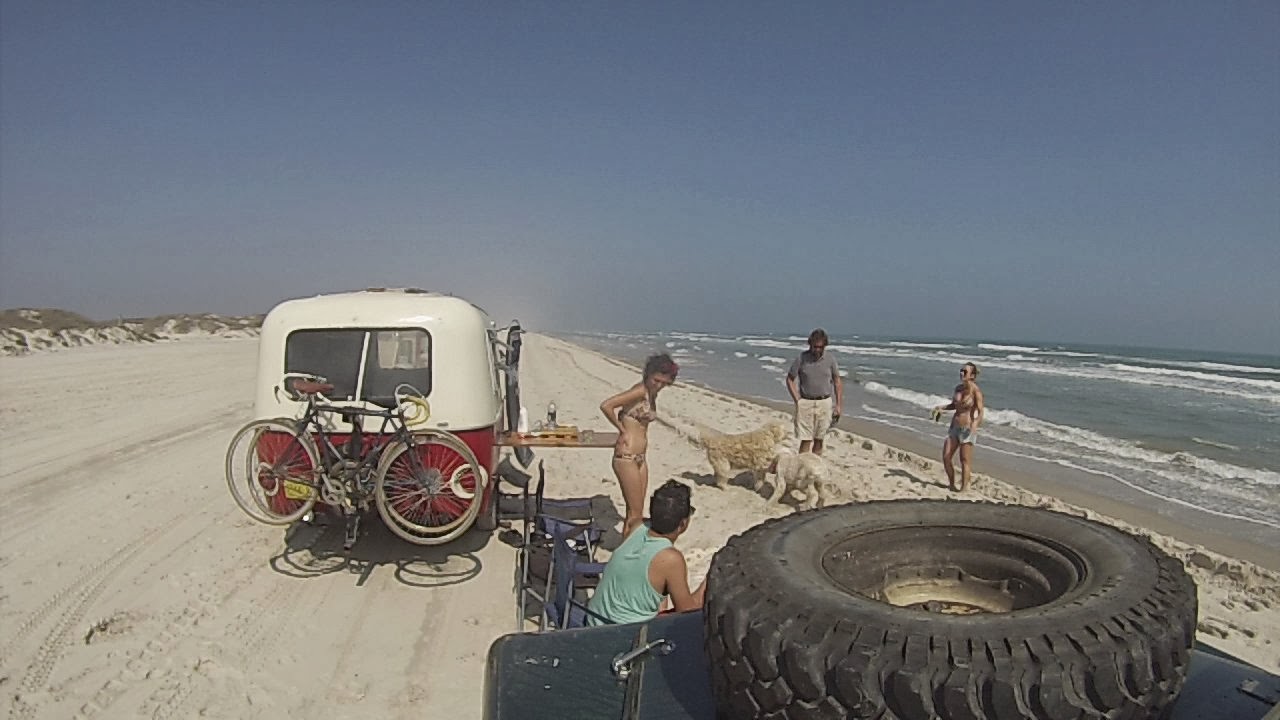 Pat and Jess are the real beach pros, they bring their Boler trailer, it's light enough, and means we have a fully stoked bar and an outside shower. Pat's outside shower is ingenious, pressurised by compressed air it's great for a rinse off after catching a few waves on their boards.
I never have really got the beach scene right. Jess was appalled with my black socks and shoes.
So I took them off and exposed my poor white feet to the Texas sun. Now I have lobster feet,....

I must say, an afternoon in the sun, listening to the surf, chatting with passers by and enjoying a few Gin and Tonics sure hit the spot.
5 comments: 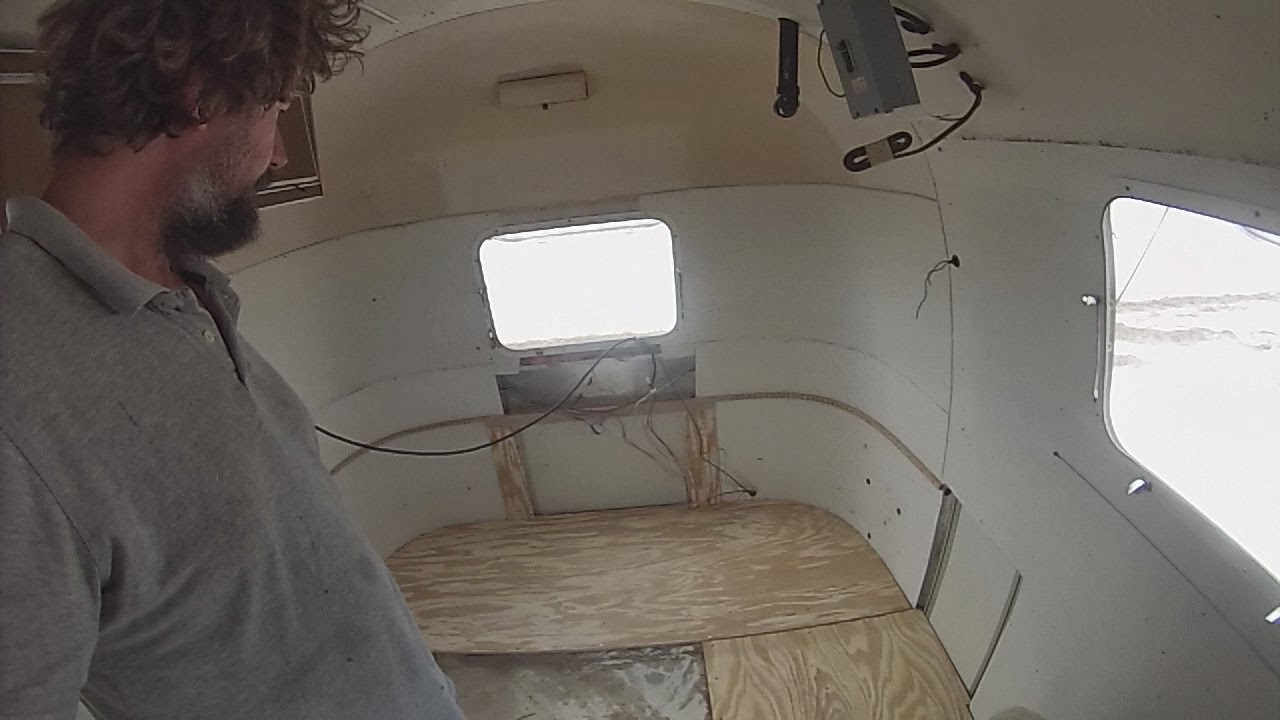 I'm getting tired of sleeping on that crummy couch, so today is the new bed platform.

All the structure is solid oak with 1/4" oak plywood panels, screwed and glued. No more staples in this coach!
The platform itself is 1/2" fir plywood. This project encloses the outside locker and most of the generator locker. The platform is sized for a double mattress, full in the US. 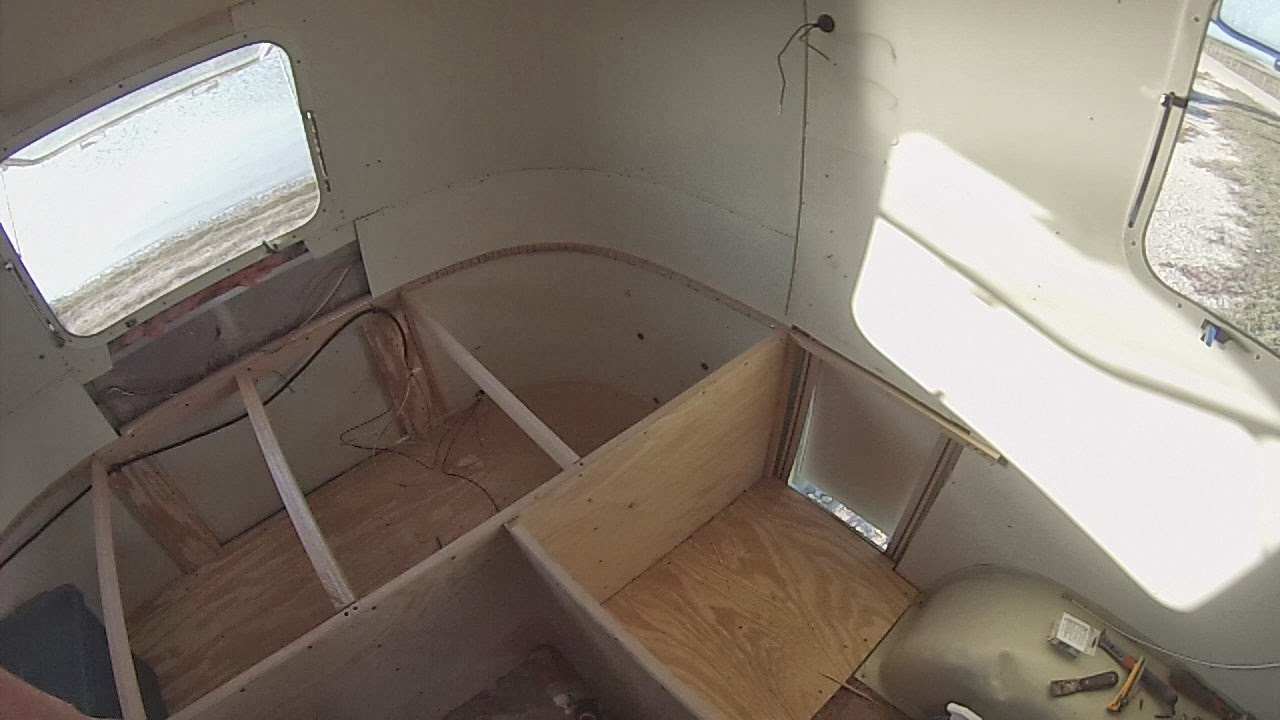 Because of the curves in the coach, there will be lots of room for cabinets around the bed. Storage!
I made a ledger along the curved wall by kerfing a strip of oak which worked very well.
The toughest part of this project was scribing the actual bed platform to the curved walls. 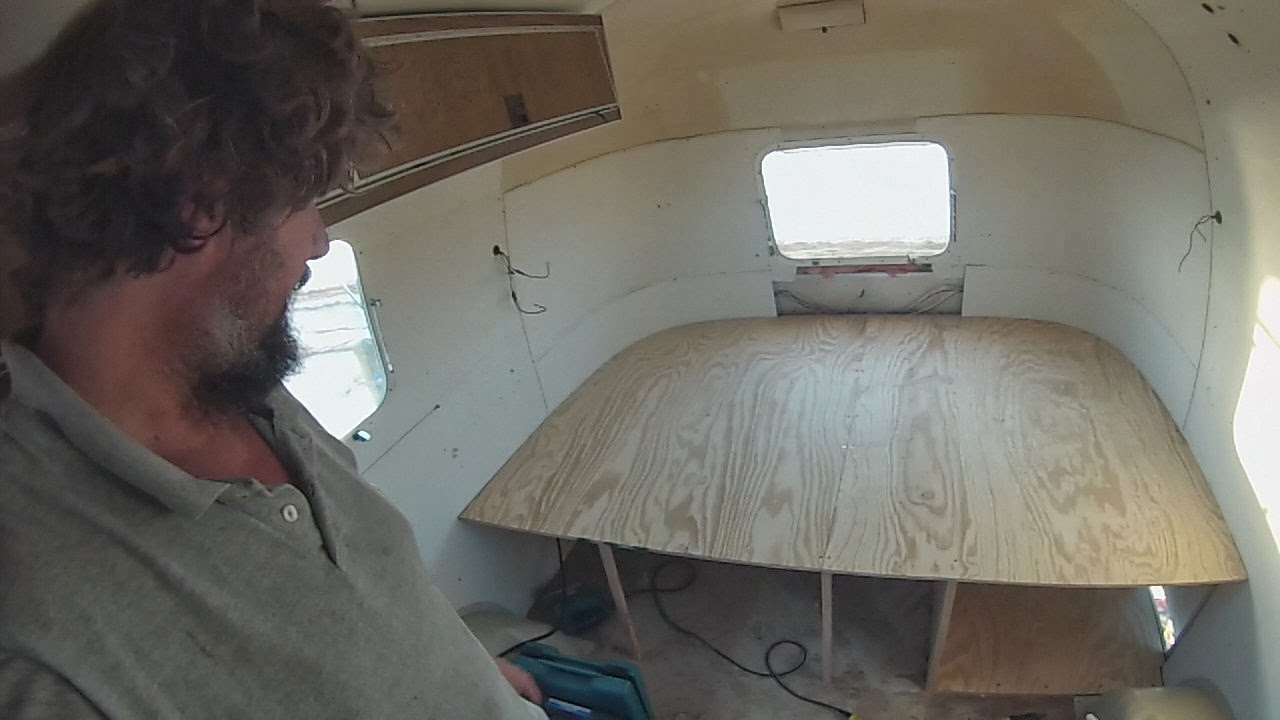 You'll have to forgive these pictures, they're stills from video that will be assembled into a series of
YouTube videos soon.
1 comment: 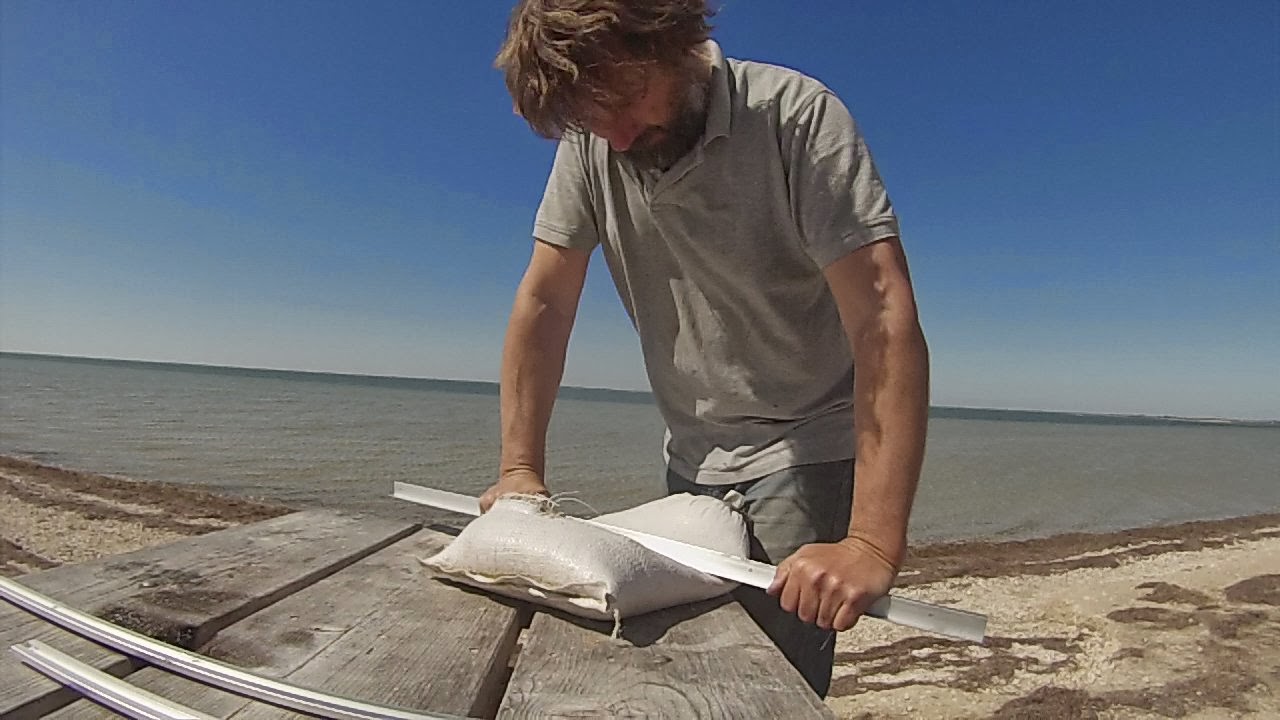 OK, "no sweat" you say.
What's another hatch wen the first one went so well.
Well,...this ones curved!
Yes, the back of the coach is a flat surface, but the sides are curved.
And as a result the hatch door and frame must be curved to match.
Now a small hatch could ignore the curve, like the outside shower, or the fridge hatch.
But this hatch is much too tall to not honour that lovely curve.
So I set out with experimenting bending the aluminium extrusions.
Eureka, with gentle force against a sand bag, plentiful here on the beach, I was able to create beautiful curves in both the door extrusions and the frame.
Soon enough I had a generator locker hatch.
No comments: 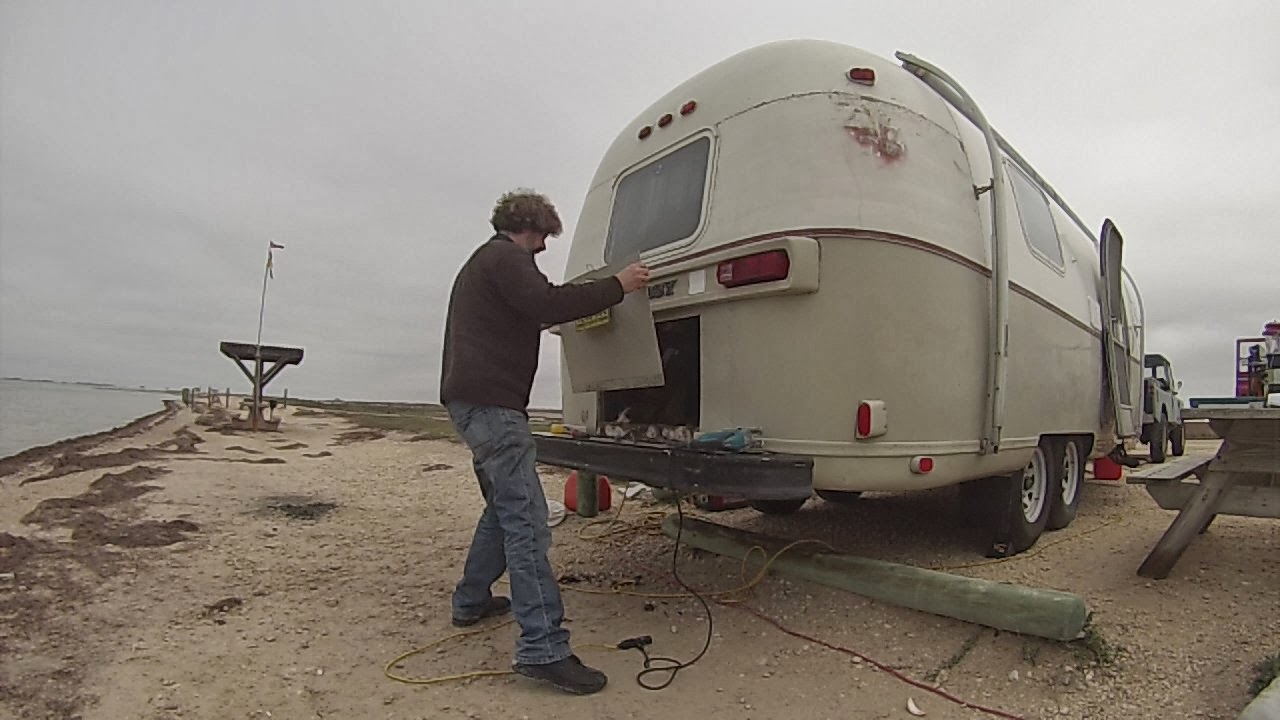 Another daunting project.
Mainly because it involves cutting a huge hole in the rear of the coach.
But the value of an outside locker is worth it, and this will be a huge locker!
Again, careful measurements are the order of the day, then just cut!
First the inside panel and more calculations and measurement, then the outside. 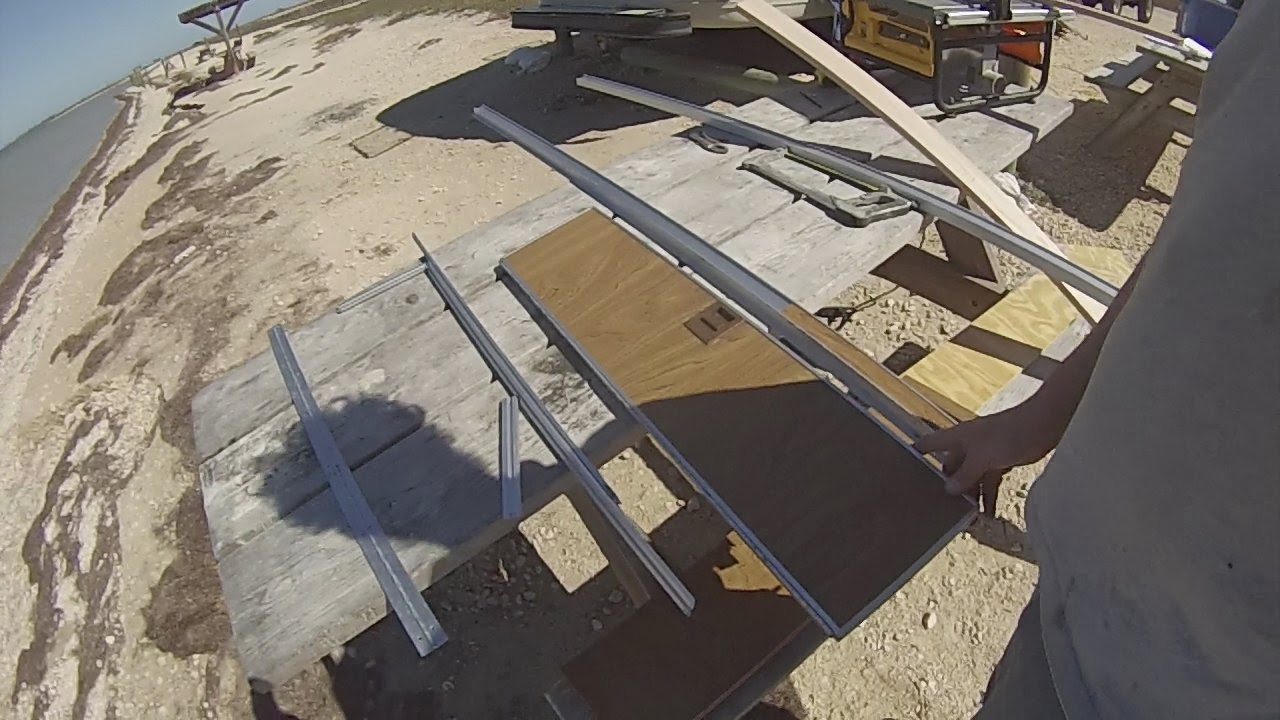 I'm going to make the hatch and frame out of aluminium extrusions recovered from the
cabinetry I've removed. I may scowl at these interiors, but the aluminium extrusions are phenomenal.
With a little modification and reworking I'll have a splendid hatch.
The extrusions connect together with screws at mitred corners.
The only trick now is to accurately cut all this aluminium, including some long "rip" cuts.
Tricky with a hack saw or jig saw. 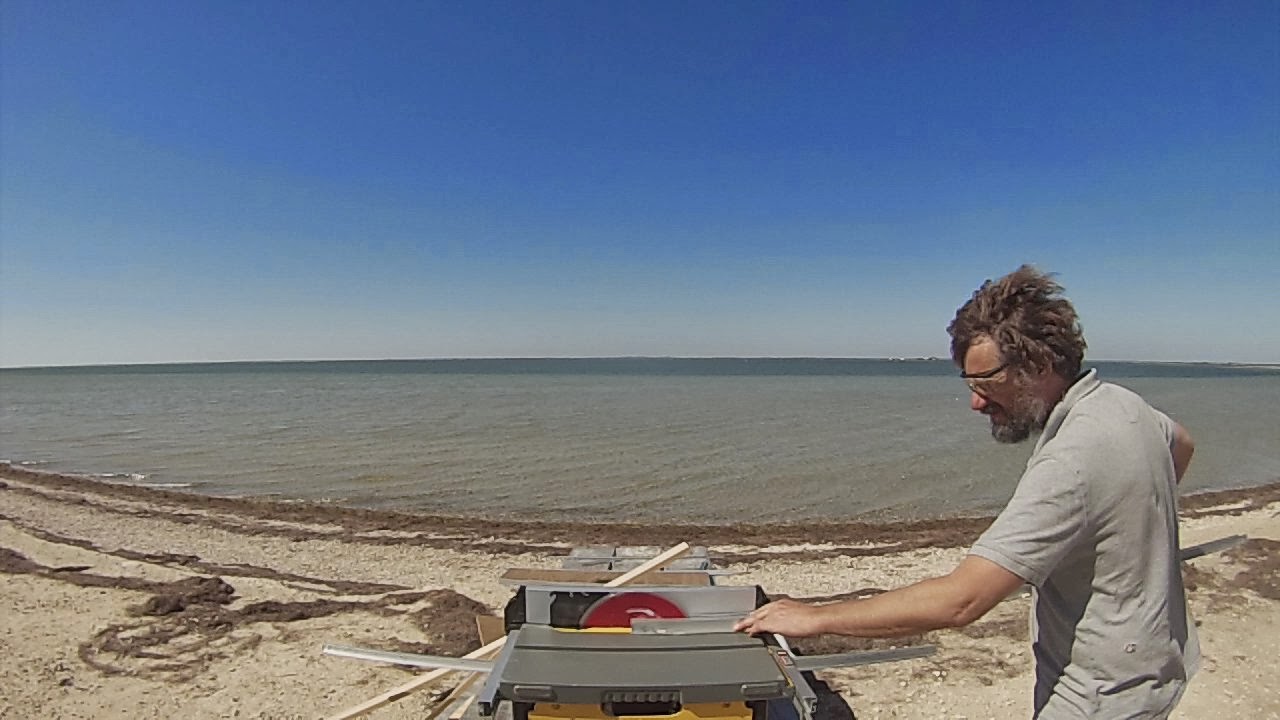 Enter the aluminium cutting blade for the table
saw! Cuts aluminium like butter, just wonderful.
Millions of hot shards imbed in your skin though, eye protection is an absolute must!

All in all I'm absolutely thrilled.
Now I just need to find a nice solid "T" handle latch for it.

Onto the generator locker,... 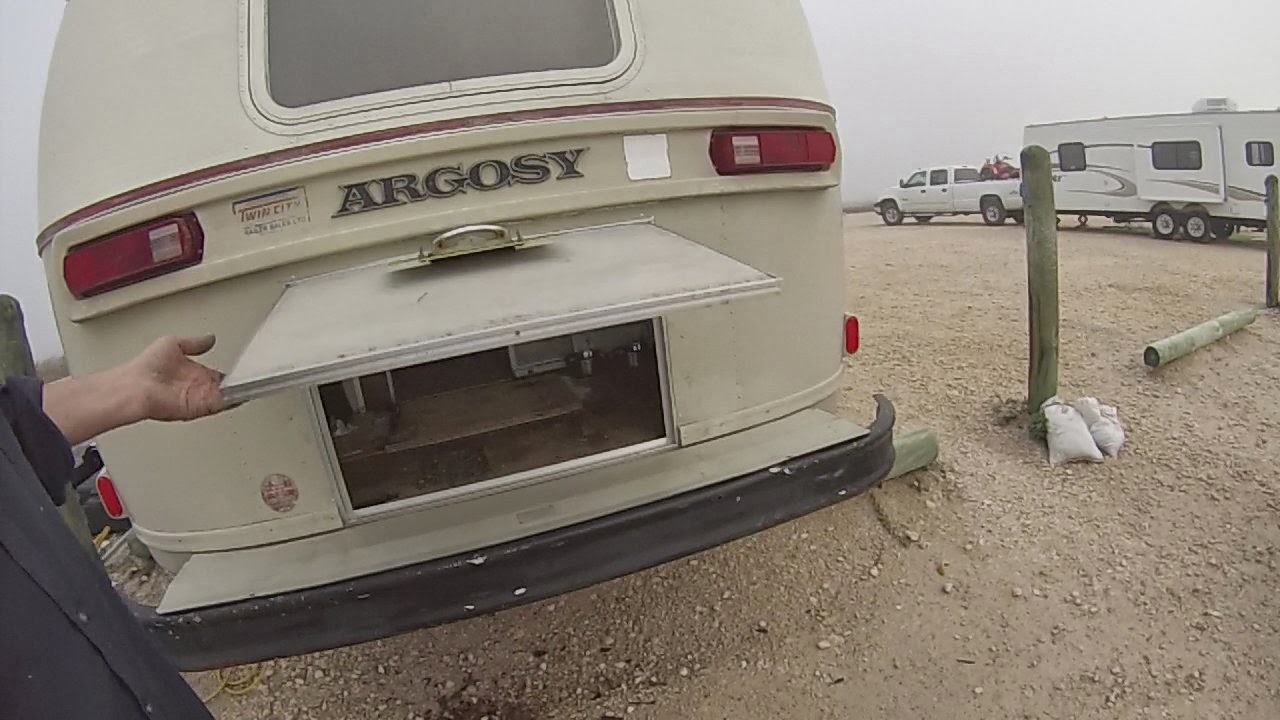 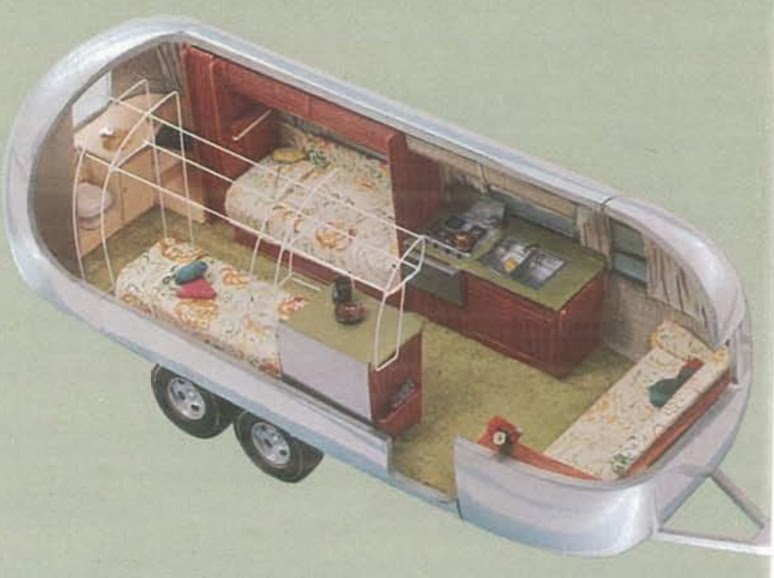 Perhaps it would help if I gave you glimpse of what I have planned for the coach.
The original layout is known as a 24 rear twin. That's a 24' trailer, actually 20' not including the tongue and bumper. From the rear moving forward there's a bathroom, then two twin beds, the kitchen and finally a couch in the big panorama windows that folds out into a double. Sort of,...
Keen 'Streamers will recognize this cutaway as an Airstream 25 rear twin, not an Argosy.
Close enough.
This layout worked pretty well when my daughters were young, but now, travelling alone, the twin beds don't make sense, the front pull out couch was always a misery and you know what I think of the bathroom. So out it comes, all of it!
So here's where I'm going.
In the layout below, the front of the coach is on the left.
Up front the couch comes out and I squeeze the galley counter back a bit to build a big 3 sided banquette, seating for six. Then there are two removable table leaves, one for small groups, both for a banquet, and none for lounging, they also fit at seat height to support cushions to make a comfortable double. Moving back the galley remains much as it was but with much better appointments and storage. then a wet bath to port which gives much more room to shower, then into the bedroom, a closet and dresser to starboard and a double bed in the rear. A real bed!
All the walls and cabinetry is oak, with slate for the bath floor and counters.
It sounds like it will be heavy, but the new joinery will be about the same weight as the old, it's all 1/4" oak plywood with small solid oak frames. 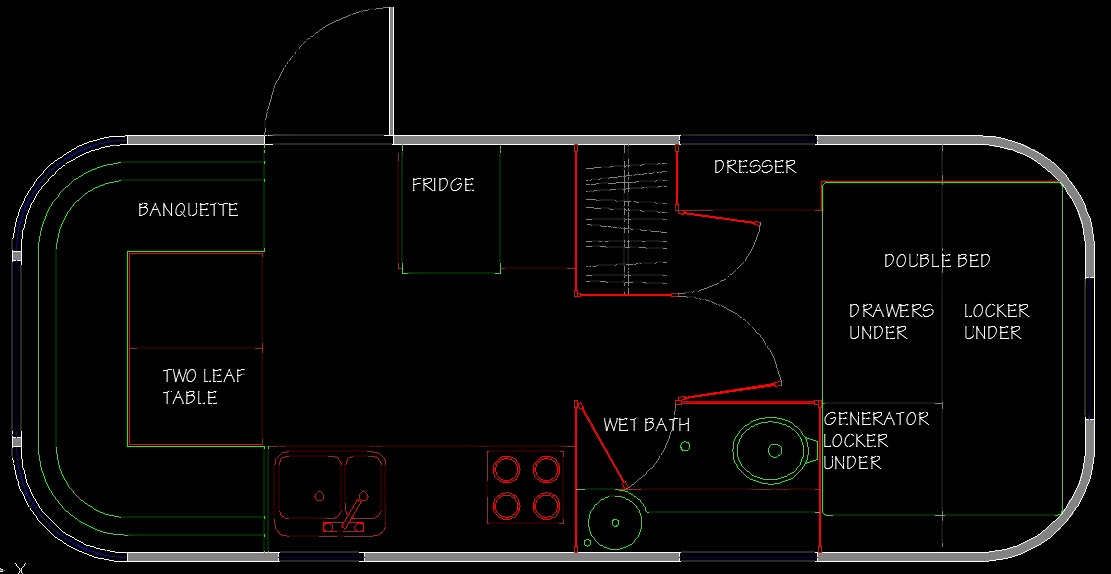 Under the rear bed is a huge locker accessed from outside and a generator locker on the port side, also with an outside hatch. under the forward half are drawers accessible from the bedroom.

I'm adding 3 big water tanks underneath, solar panels on the roof and will repaint the coach to match the Rover, British Racing Green, with Limestone above. 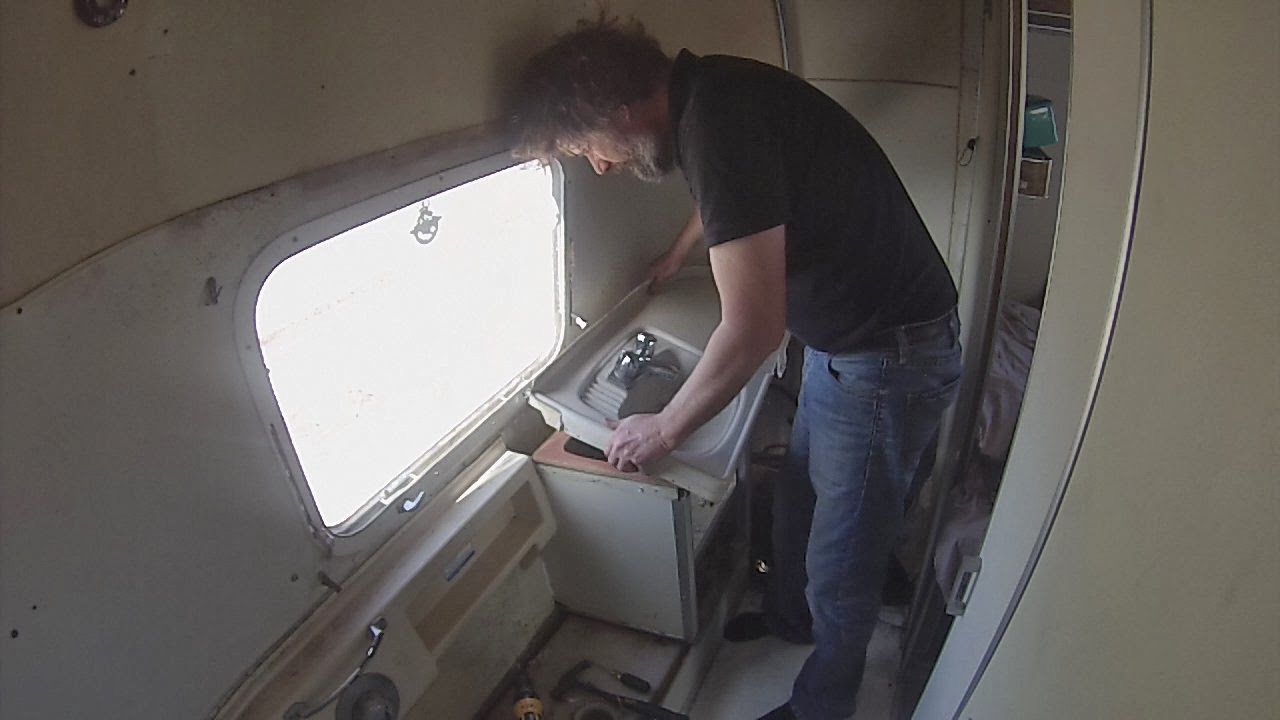 I simply despise the bathroom on this coach, it's a crummy layout, the shower is cramped, the black tank packed it in years ago and there are water leaks behind the walls where I can't get at them.
Ripping it out will be cathartic! 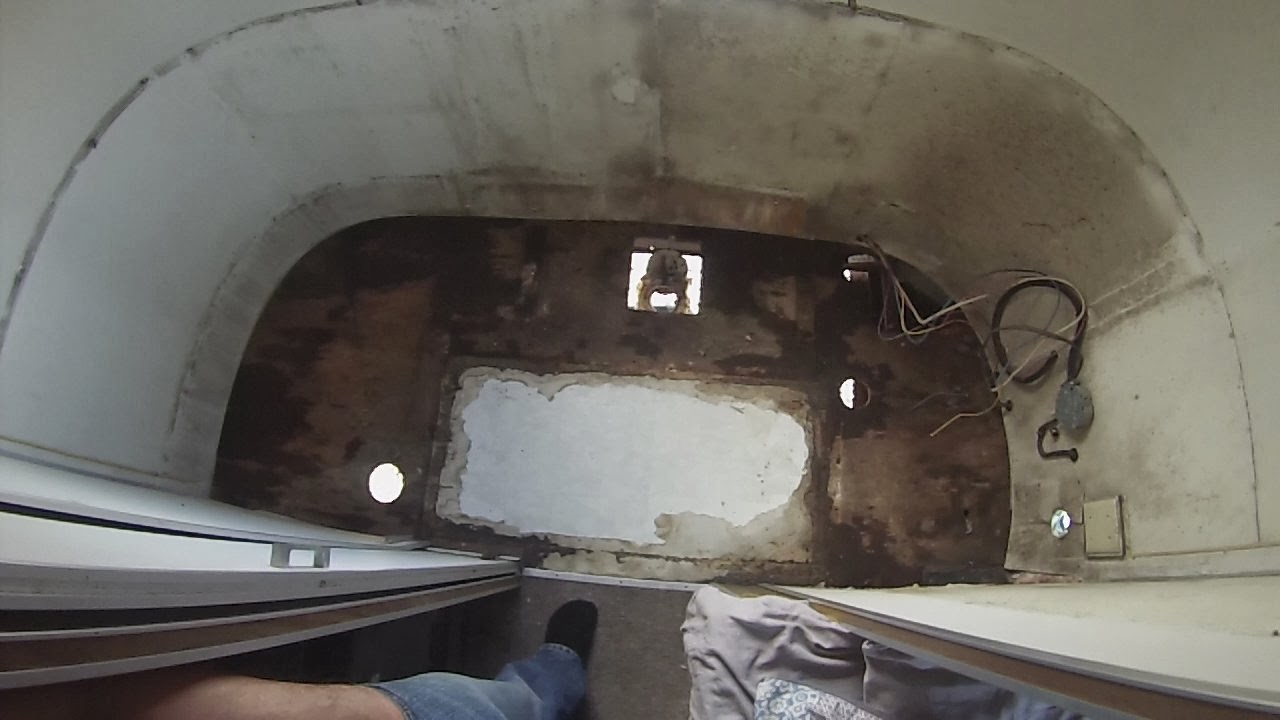 These Airstream / Argosy coaches are so wonderfully built in terms of the shell and running gear. But the interior materials and fit is appalling. I don't doubt it is still better than your average box trailer, but held up against even a modest yacht interior it's rubbish. Now I'm certain this will rile the purists, and I understand weight is a huge concern, but Jeez! My refit will be much heavier, I accept this as a reasonable compromise.
The plywood floor in the bathroom was in remarkable shape. These coaches suffer from water ingress from a poorly designed and sealed steel channel across the back. t traps and channels water onto the plywood. Many coaches of this vintage are completely rotten out.
With the bathroom out I moved forward and ripped out both of the single bunks that were just forward. Now half the coach is empty, a major cleanup and onto the outside locker! 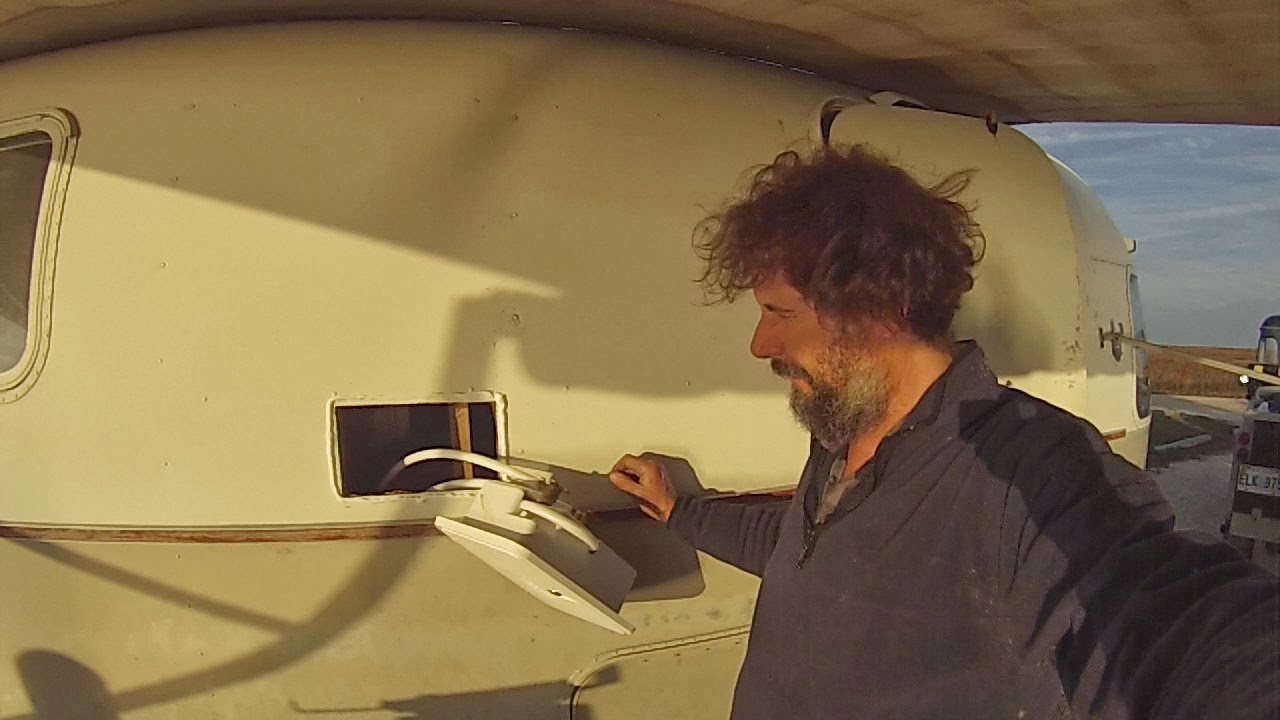 A project today!
I love a project.
As you may have gathered, I'm going to completely refit the Argosy coach while traveling.
No easy feat as I also have to live in here, with all my stuff!
So today marks a milestone, The beginning of the tear out. But before I do that I will install an outside shower so I can shower once the inside one is gone. 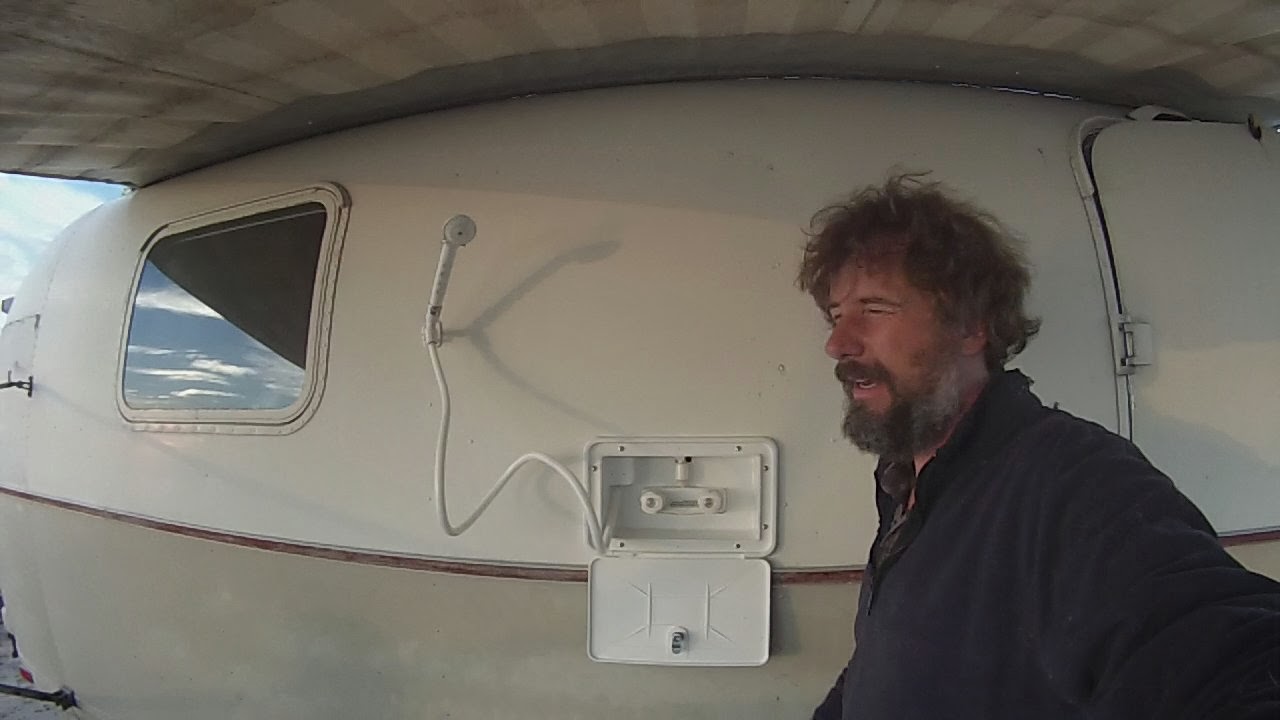 This is a difficult thing for me, as it involves cutting a rather large hole in the side of the coach, and then bolt in a crappy plastic exterior shower unit. I'm sure there are much nicer ones out there but even the marine ones are roughly the same quality, just twice the price. I opted for a unit that uses a standard shower faucet, that way in time I can at least replace the guts with something reasonable. 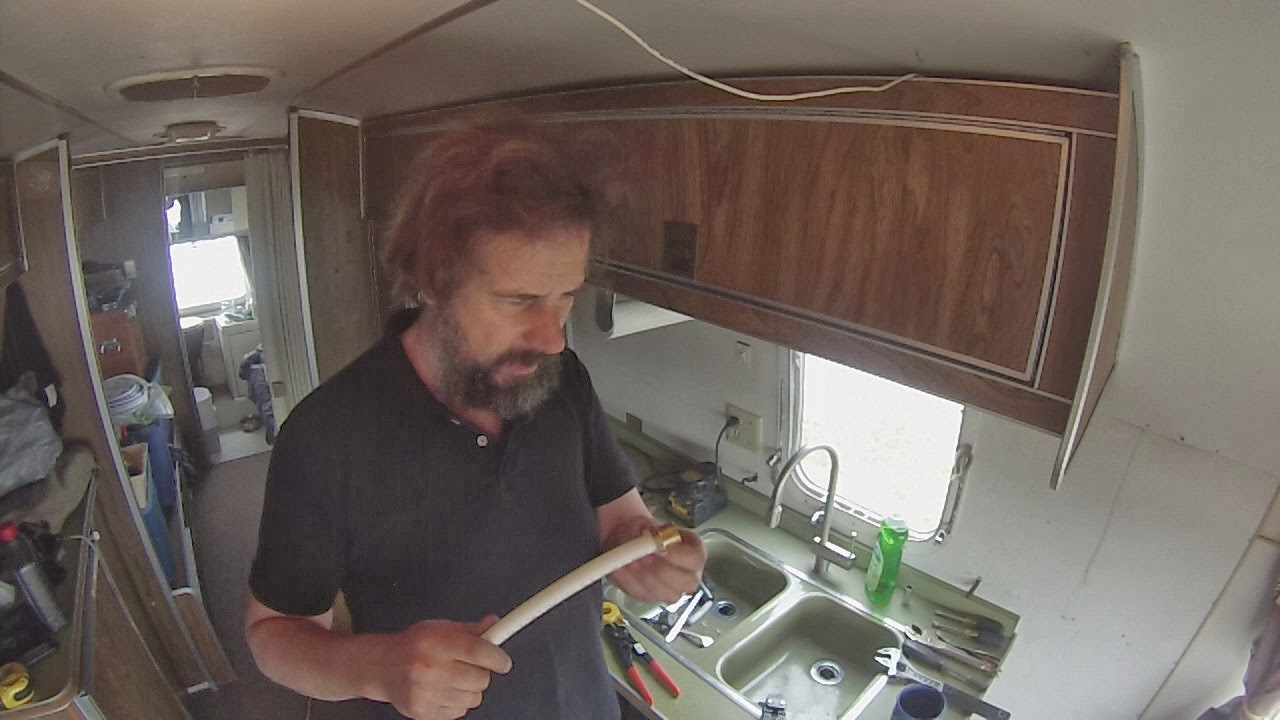 Of course the other stress is to cut the hole in the right place! There is very little clearance where I'm going to put it and measurements are critical.
It all went very well and works great. I enjoyed a nice hot shower as did both Patrick and Jessica. 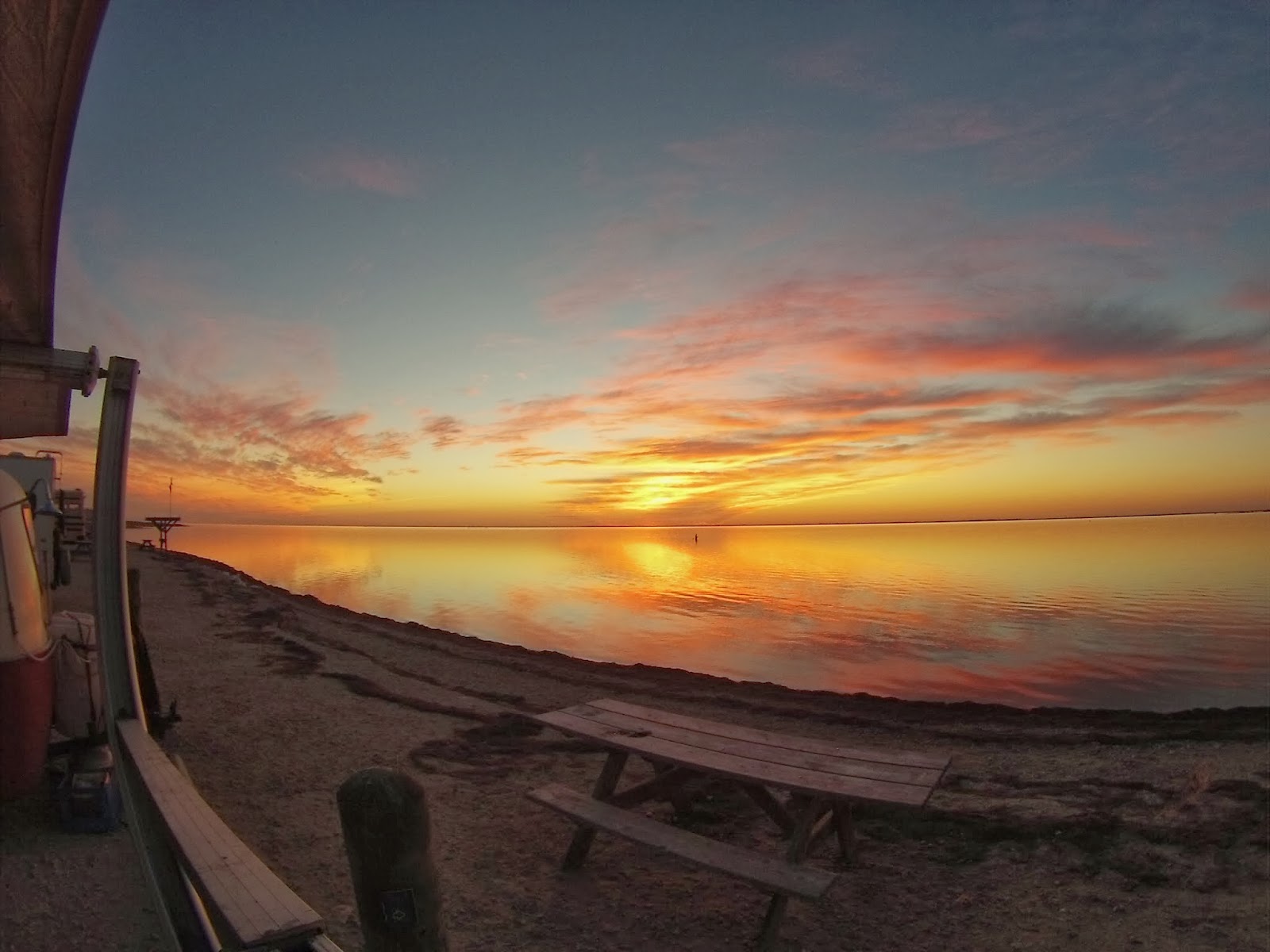 As part of this project I also redid all the pressure side plumbing in the coach. All the old copper was in terrible shape, with dozens of repairs and patches. I redid all the plumbing in plastic PEX pipe, wonderful stuff, I've been using it for years in the houses I build. I also installed a long overdue new galley tap, the old one was a disaster.
It's an extraordinary experience to be able to work right on this beautiful shore. The ducks gather by the hundreds just yards offshore, the sunsets are spectacular and the people here just wonderful.

Tomorrow, out comes the bathroom!

Off the coast of Texas lie several long barrier islands. 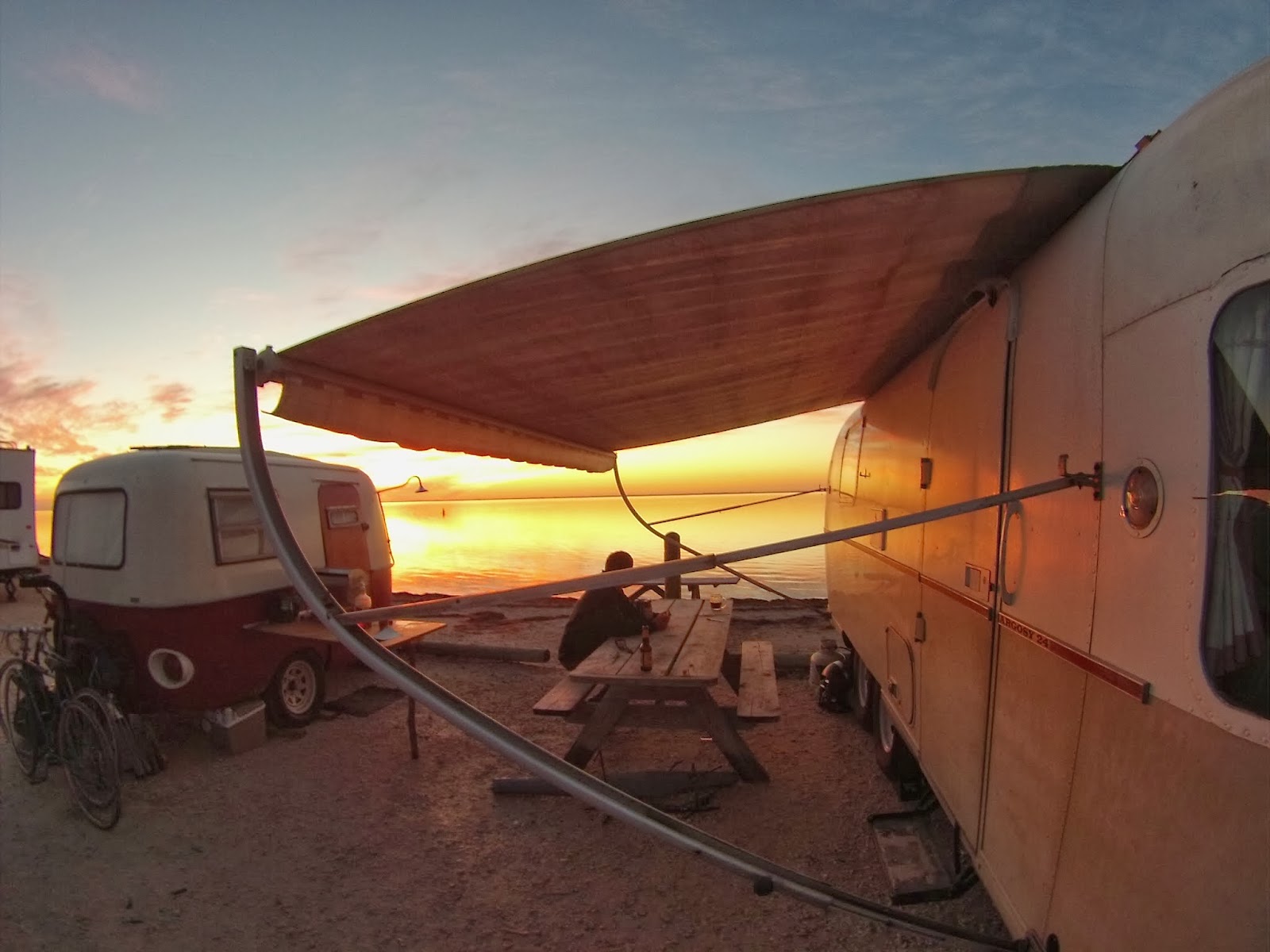 North Padre, right off Corpus Christi is home to a wonderful National Park, the Padre Island National Seashore. This is a wonderful place to stay, there is a campground on the gulf side of the island with limited services and on the inland side, dry camping. However water and dump are only minutes away. Best of all, park admission in $20 a year and camping is $10 a year!

I wanted to find a spot where I could start my refit project on the coach and this is perfect. 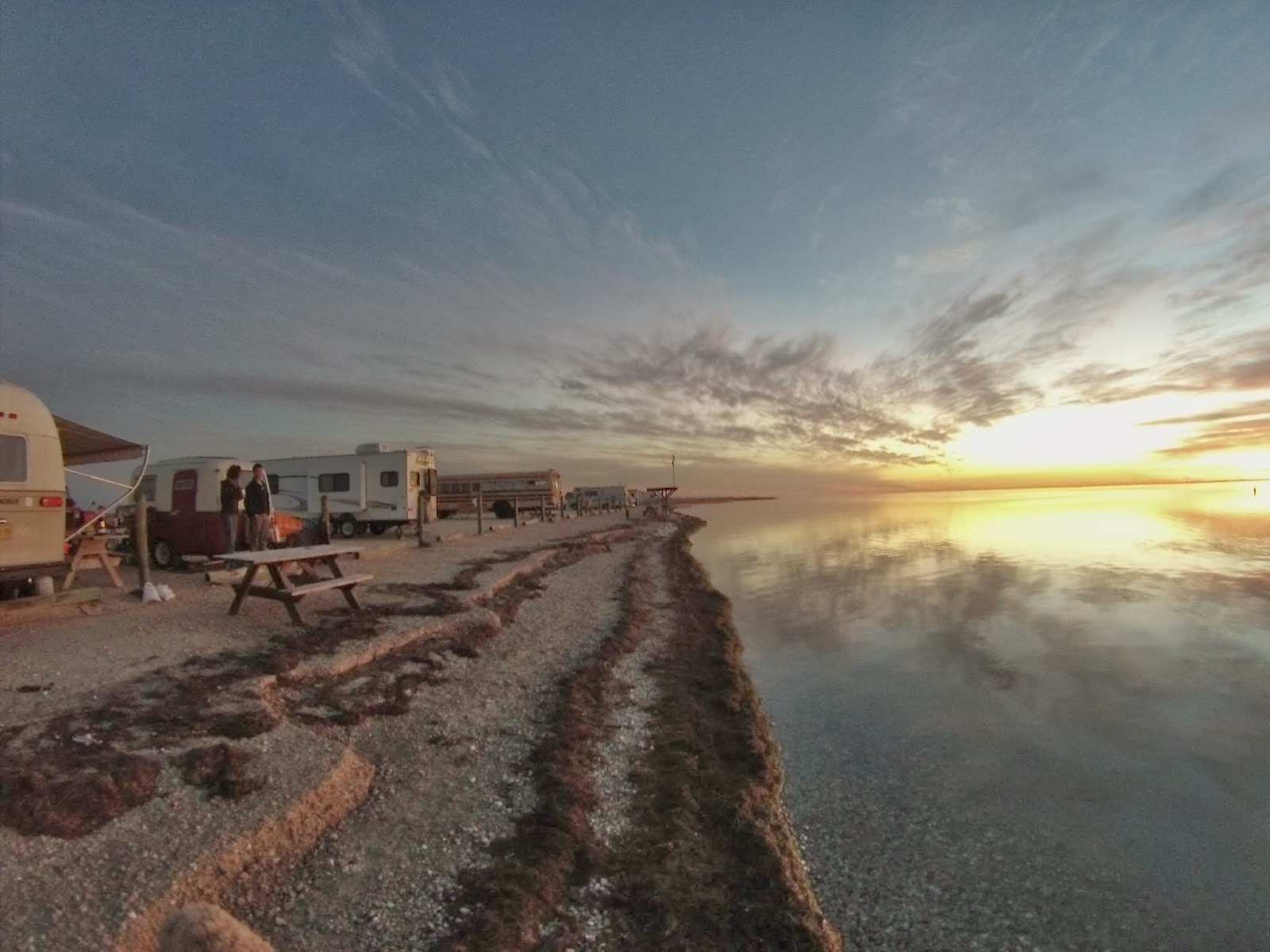 Living on the intercoastal side of the island means no surf, and very little tide, it's more like a lake, but it's much calmer. The campground on the gulf side is several hundred yards back from the beach over the dunes.
When we want real beach it's a short drive to the state beach where you can park directly on the sand right in the surf if you're foolish enough, and several are everyday.

I've met some wonderful people here and most evenings people gather for a BBQ and drinks.
Sometimes music, sometimes a bonfire.

Geordie is in heaven!