At the Coast Guard tower 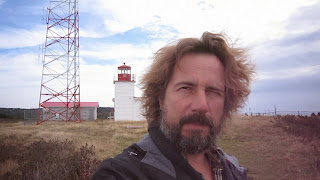 The work Dr. Fisher does involves sending radar pulses out across the gulf of Maine from several stations in Maine and Nova Scotia. These radar pulses bounce off waves in the gulf and using sophisticated modeling software he can map currents in the gulf with great accuracy. Cool stuff. The electronics is housed in the Coast Guard radio shed at the extreme southern tip of the island, a dramatic spot indeed. 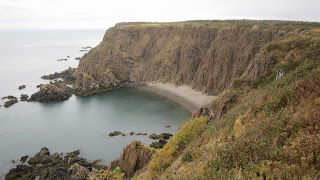 I didn't feel I should take any pictures of the gear in the radio shed in the interest of national security but wow! what a pile of cool gear.
The installation is on a very high cliff overlooking the Gulf of Maine. I managed to climb out on a rather precarious rock bluff well beyond the safety fence,... 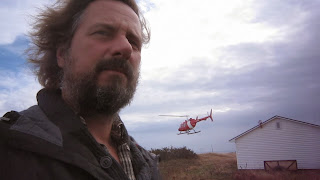 When you stand in a place like this, alone and in still air your mind about bubbles over, for me anyway, I'd love to build a little studio, right on this bluff, and build a beautiful but precarious stairway down to the completely inaccessible beach, what a spot it must be.
That mood was promptly squashed by the instant appearance of a Coast Guard helicopter directly overhead! "h lovely"I thought "'ve gone and pissed them off, threatening the good doctors work." Or worse, perhaps an alarm triggered when we opened the door to the computer room from hell!
Then they landed! 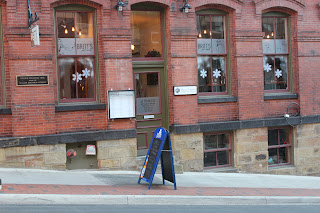 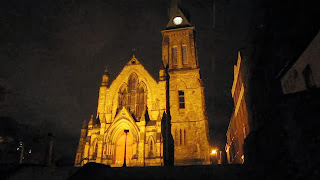 No worries, the little building in the picture holds 30,000 liters of jet fuel, it's a refueling stop.

Neil promptly fixed the radar, without more than some carrying and lifting on my part, well done.
And we're off to Saint John! Back on the ferry and up to the city, bookended into the hotel and off to the pub!
Britts, awesome spot, good folk behind the bar.
I had simply amazing prosciutto wrapped scallops!
Our late night walk back to the hotel was lovely, I really like Saint John, I believe it's in for a renaissance. it's a city on a hill of a peninsula with three sides to the sea. Ancient architecture and very walkable, love it!