Well regardless of my being kicked out of the country, I'm still going to the fall Rover event in the Uwharrie National Forest. That's in North Carolina, A hell of a long way south for a weekend trip.
Ah hell, I'll pop by Dave Bobeck's place in DC on the way back up, all in all it'll be a great week.

So I swung through Brooklyn to pick up the coach and headed down to North Carolina.
To be fair, "swinging by" Brooklyn to pick up a travel trailer is a project in itself, but I'm getting so used to bombing along these crazy highways in the Boston - Washington corridor that's it's actually becoming rather mundane. Except for the tolls, ouch!

bout 200 miles north of Uwharrie I had to climb a steep grade pulling out of a gas station so I used low range to ease the burden on the clutch. Well, I gave it too much oomph and BANG!
And I had no more drive....

Now if this were a standard Land Rover 109, I'd know I'd broken a halfshaft in the rear axle, but as I have the bulletproof Salisbury rear end I knew that couldn't be.
Therefore it must be the transmission or the transfer case. I knew it wasn't the driveshaft aster crawling under to check. 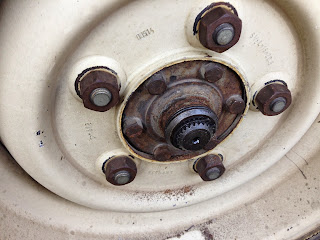 Rather than jump to conclusions I pondered for a bit, played with the transfercase gear levers and found it made a horrible grinding when trying to drive. I left it in gear trying to drive and had a look under to see if the driveshaft was spinning, IT WAS!

Yay, or maybe boo. well at least it's not the transmissions.
Maybe it is a bust halfshaft? or s stripped drive flange.
To confirm that it wasn't the actul differential I engaged the differential lock which will force the power to the side that isn't broken and wow we moved!
OK, halfshaft or drive flange, great, but I have neither in spares.
So I engaged front wheel drive and carried on to Uwharrie, carefully, stock front differential, heavy, heavy load!

Once at Uwharrie I removed the axle dust cap and with the truck running in gear the halfshaft was spinning in the drive flange, great, just need a good welder to weld them together and I'm all set.
After the weekend of not moving the truck at all I found a welder an hour north who did a lovely job for $20! good as new.