The weather forecast was daunting. I had planned to cross into Canada at Buffalo New York, but it sounds like there's some snow coming. Freezing temperatures meant at least partially winterizing the coach. First order of business was to dump the waste tanks, I was carrying full nearly tanks, about 100 gallons! This time of year however, there are very few campgrounds still open and as I head
north even fewer. With luck I found a place in Pennsylvania that let me dump for $25! 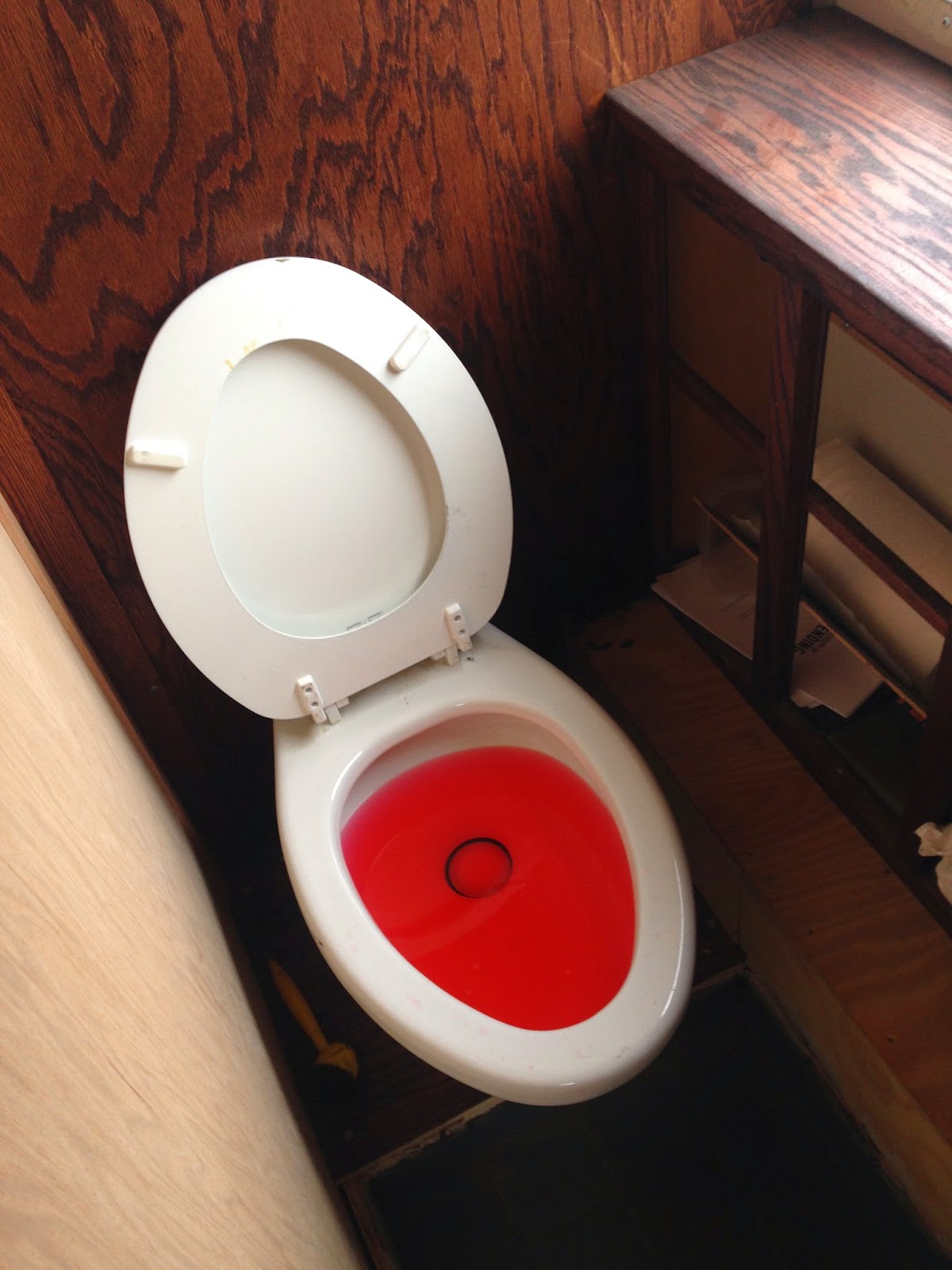 It had to be done, if the tanks and dump valves froze I'd be ruined.
I then dumped several gallons of RV antifreeze in both tanks and would only flush the toilet with antifreeze from here on.

To protect the fresh water tank I rigged a return line to the tank so I could run the hot water from the tap back into the tank thus warming all the water in the tank. This was all well and good as long as it didn't get really cold.

Then the news warned of a complete white out in Buffalo, a freak storm of lake effect snow that eventually dumped seven feet of snow on the poor town! I headed east and crossed at Brockville Ontario.
Then north to Ottawa and west on the Trans Canada.
I drove across and back in my teens but couldn't believe the Trans Canada was still a two lane road from just west of Ottawa to Winnipeg! 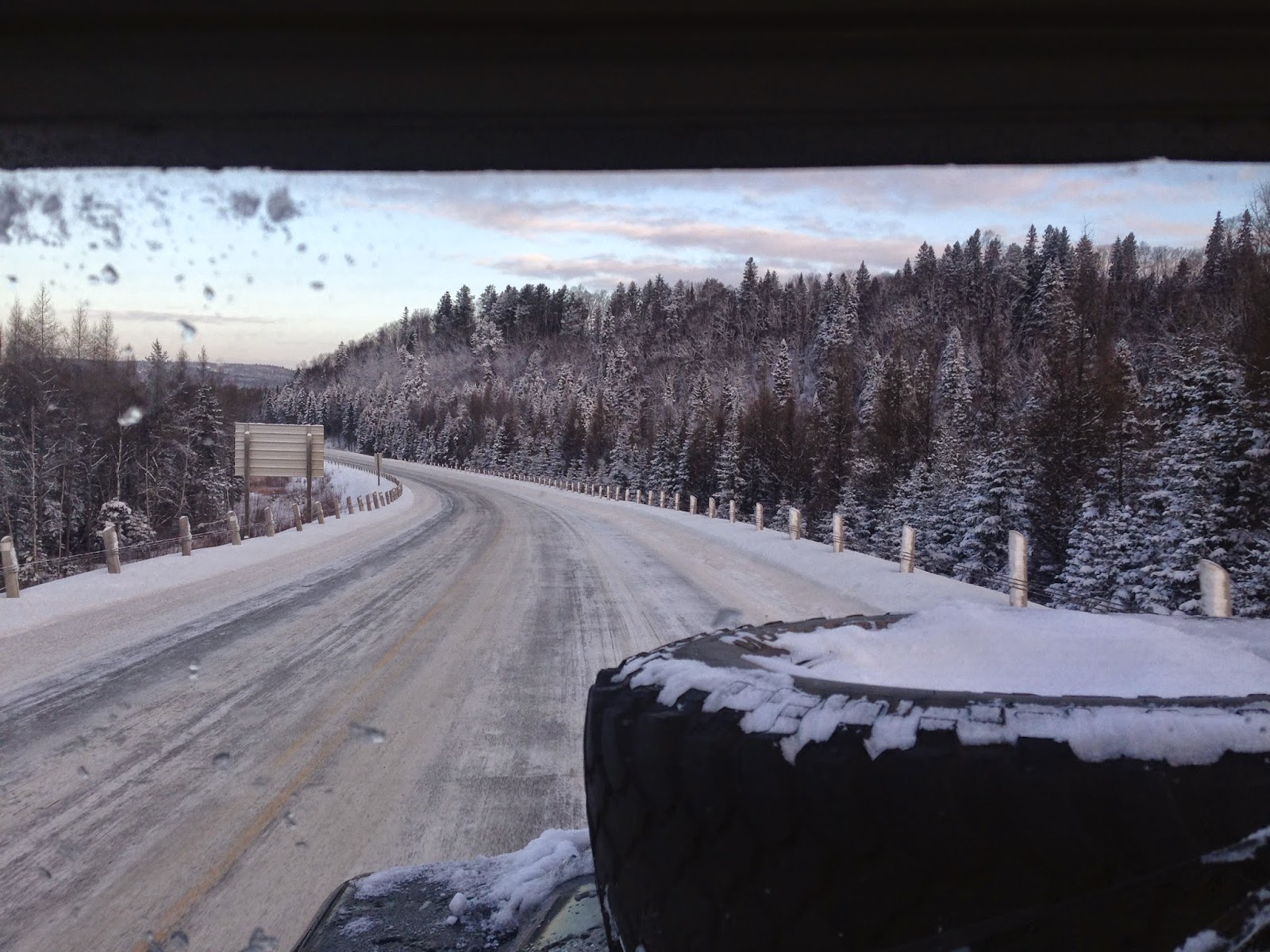 By Sault Saint Marie I knew this was going to be epic, the temperate was dropping to minus 10 overnight so I was having to get up in the night and heat the fresh water tank. This was no easy feat as I had no real heat in the coach, my saving grace was a very wise investment in a 12 volt electric matrass heating pad. What a delight to crawl into a warm bed.

Crossing the top of Lake Superior was on ice packed roads, hills and treacherous. White knuckled
driving to say the least. 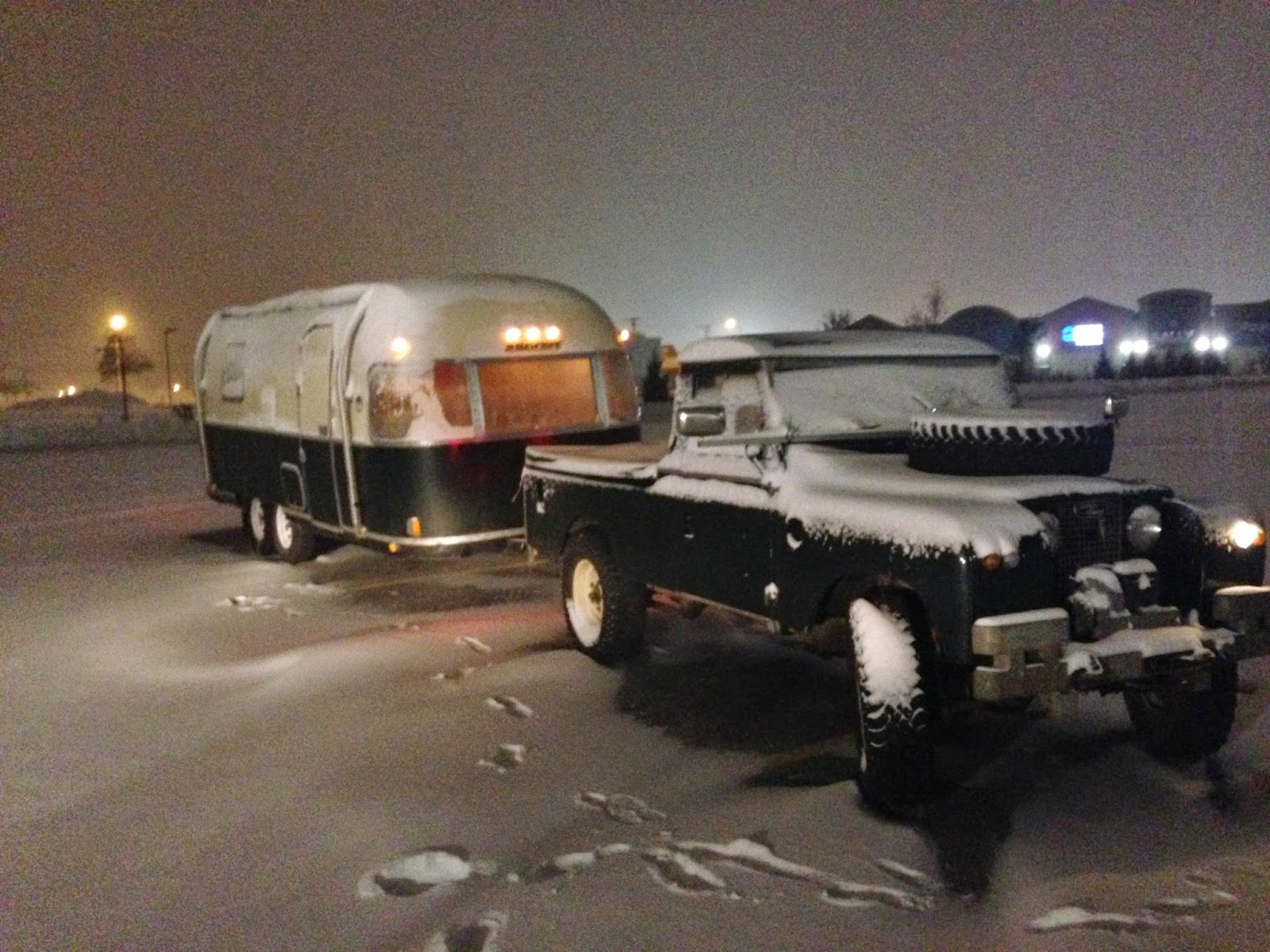 By Thunder Bay I was in trouble. The nighttime temperature was minus 22 and I had to abandon the
water system altogether. I spent a frantic day thawing, draining and refilling with antifreeze.
I bought and installed heat tape for the drain pipes as I was concerned about dilution of the antifreeze.
which meant I had to run the generator all night to run the heat tapes and my heated bed. 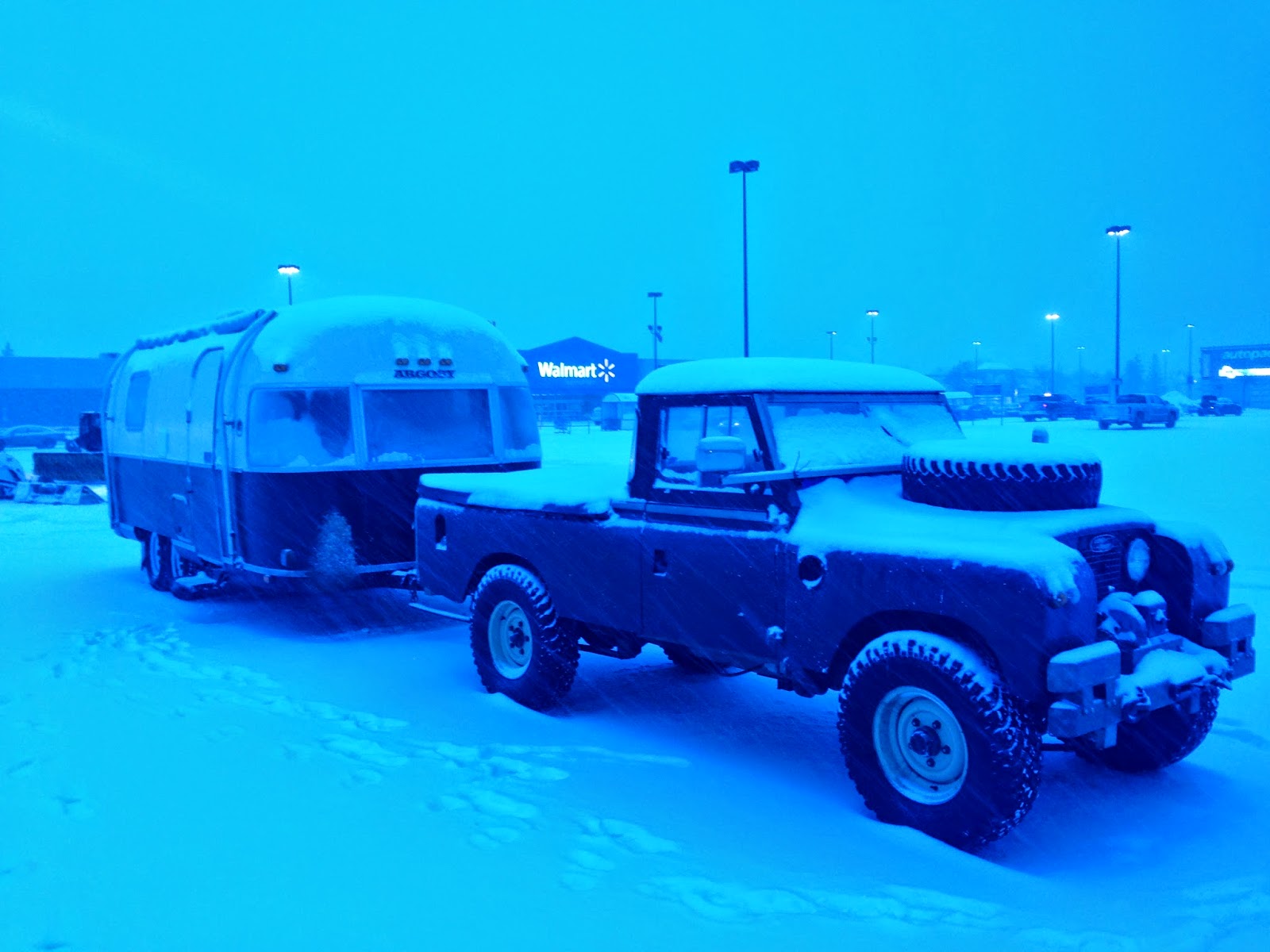 after a frantic day including several hours under the coach with a hair dryer thawing the shower lines that cross under the floor I had successfully winterized. I'd also bought a monster propane catalytic heater to keep the inside reasonable, however I didn't dare use it at night.

Then at Regina the temperature dropped to minus 35 with heavy blowing snow.
I was snowed in for two days waiting for the snow to stop and the roads to clear.
All the while huddled next to the heater making strategic use of propane and gasoline for the generator as I couldn't drive anywhere.

Two days later when I emerged from this winter hell the roads were solid, rutted ice.
I needed four wheel drive to get around even this flat city. 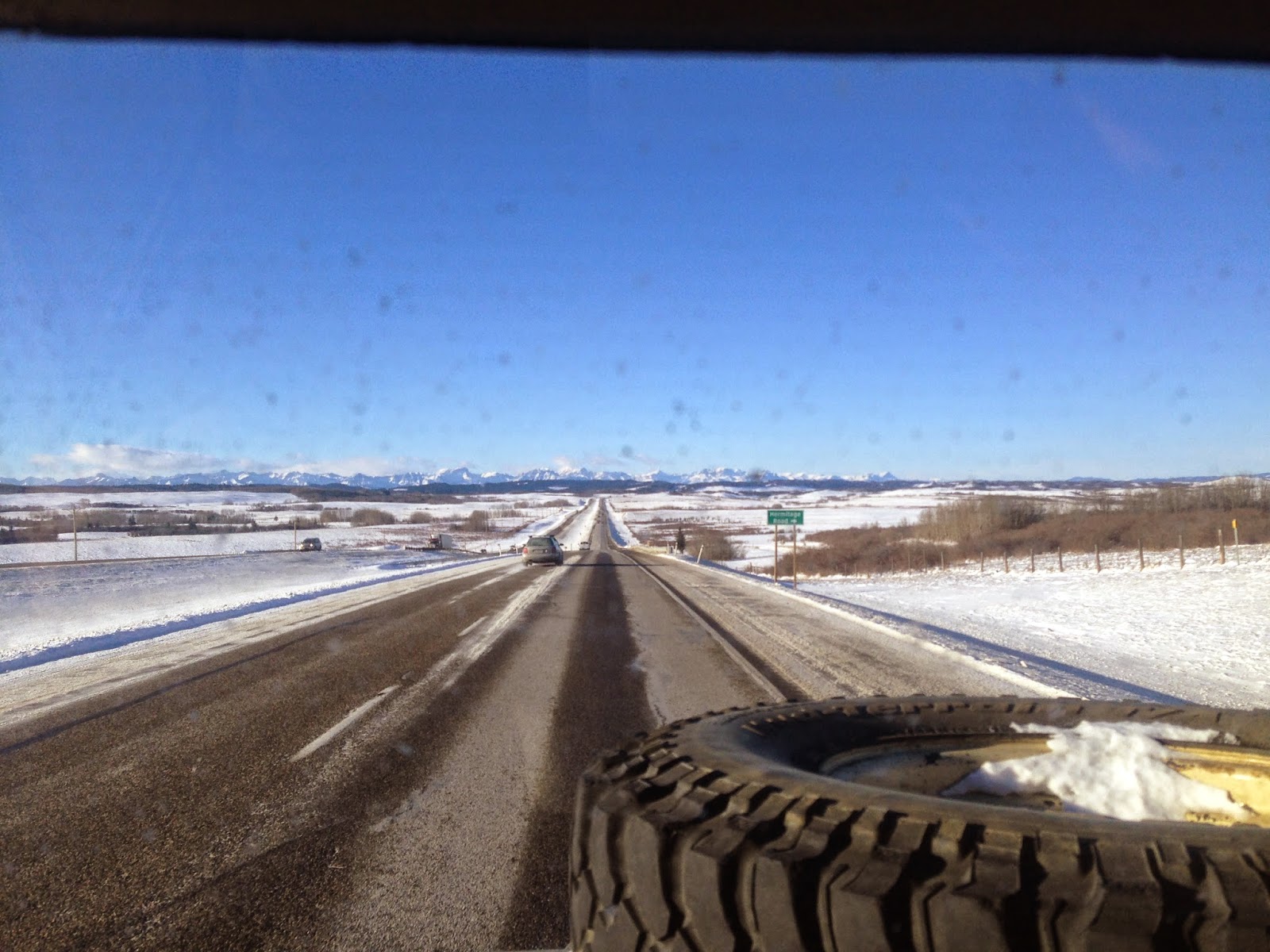 The truck was a hero though, starting faithfully at these temperatures and all it's systems tolerating the inhumanity. It fact pup and I were quite cozy inside as the little pickup cab is easy to heat with my big heater.

At long last I passed through Calgary and the roads began to clear however the temperatures remained brutally cold. But the sight of the looming Rocky Mountains warmed me somehow.
I should have known better,......